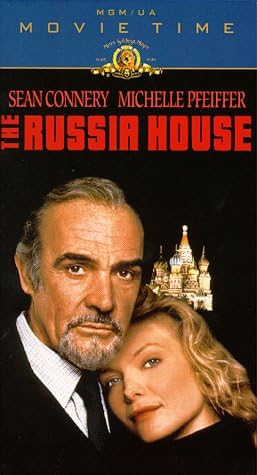 Intelligent casting, strong performances, and the persuasive chemistry between Sean Connery and Michelle Pfeiffer prove the virtues in director Fred Schepisi's well-intended but problematic screen realization of this John Le Carré espionage thriller. At its best, The Russia House"span" depicts the bittersweet nuances of the pivotal affair between a weary, alcoholic London publisher (Connery) and the mysterious Russian beauty (Pfeiffer) who sends him a fateful manuscript exposing the weaknesses beneath Soviet defense technology. Connery's Barley is a gritty, all-too-human figure who's palpably revived by his awakening feelings for Pfeiffer's wan, vulnerable Katya, whose own reciprocal emotions are equally convincing. Together, they weave a poignant romantic duet.

The problems, meanwhile, emanate from the story line that brings these opposites together. Le Carré's novels are absorbing but typically internal odysseys that seldom offer the level of straightforward action or simple arcs of plot that the big screen thrives on. For The Russia House"span", written as glasnost"span" eclipsed the cold war's overt rivalries, Le Carré means to measure how old adversaries must calibrate their battle to a more subtle, subdued match of wits. Barley himself becomes enmeshed in the mystery of the manuscript because British intelligence chooses to use him as cat's paw rather than become directly involved. Such subtlety may be a more realistic take on the spy games of the recent past, but it makes for an often tedious, talky alternative to taut heroics that Connery codified in his most celebrated early espionage role.

If the suspense thus suffers, we're still left with an affecting love story, as well as some convincing sniping between British and U.S. intelligence operatives, beautifully cast with James Fox, Roy Scheider, and John Mahoney. Veteran playwright Tom Stoppard brings considerable style to the dialogue, without solving the problem of giving us more than those verbal exchanges to sustain dramatic interest. --Sam Sutherland